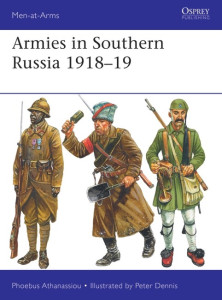 An important aspect of the Russian Civil War were the several Allied expeditions immediately following World War I in support of the disunited Russian 'White' armies resisting the Bolshevik Revolution. Although they ended in failure, these ventures were long resented, and were the origin of the 70-year-long Soviet suspicion of the Western Allies. British and US expeditionary forces operated in North Russia and Siberia in support of General Yudenich and Admiral Kolchak respectively, and a French and Greek expeditionary force (plus Romanian and Polish elements) operated in Crimea and south-western Ukraine, in support of General Denikin. The situation was further complicated by the presence of strong Imperial German elements still under arms, and by war between various factions in the Ukraine. This Southern theatre of the Allied interventions is far less well known than that of the British and Americans in the North and East.
Featuring rare photos and new colour plates, this fascinating new book describes this major Allied intervention in the Russian Civil War. Dr Phoebus Athanassiou writes a compelling account of how the French and Greeks alongside White Russians were greatly outnumbered by pro-Bolshevik forces and were relentlessly pushed back by the Ukrainian forces. In just over 4 months, on 28 April 1919, the last of their forces were evacuated by Allied navies from Sevastopol in Crimea. 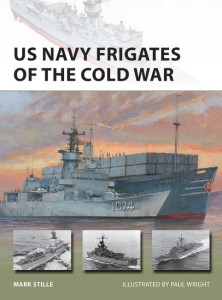 Though they were never the most glamorous of warships, found US Navy frigates were frequently found on the frontlines of the Cold War at sea. These warships were the descendants of World War II's destroyer escorts, designed primarily to escort convoys. They specialized in anti-submarine warfare, but were intended to be numerous, tough, versatile, and well-armed enough to show US naval power around the world, performing roles that varied from intercepting drug-smugglers to defending aircraft carriers.
When the Cold War turned hot, frigates were often there. It was a US Navy frigate, Harold E. Holt, that conducted the US Navy's first hostile boarding action since 1826 during the SS Mayaguez incident. Frigates were at the forefront of operations in the Persian Gulf during the Tanker War, with the frigate USS Stark suffering a notorious Exocet attack by Iraqi warplanes, and proving the Oliver Hazard Perry-class's legendary toughness.
This book explains how the technology and design of frigates changed during the Cold War, how the classes were modified to keep up to date, and explores the many varied missions they performed during the Cold War and since. 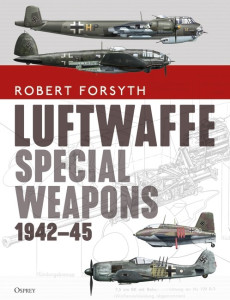 As the course of World War II turned against the Third Reich after Stalingrad some of the most inventive and radical proposals, and designs, were put forward by armaments manufacturers, scientists and technicians, aircrew and even private individuals to the Reichsluftministerium (German Air Ministry) for consideration. Some proposals were destined never to leave the drawing board, while others not only underwent trials but were issued to operational units and used in action.
In this fascinating new book, leading Luftwaffe historian Robert Forsyth examines the many different types of weapons that comprised the Luftwaffe's increasing potent arsenal during the second half of the war. This was the period that saw the development and adoption of aerial torpedoes, wire-guided rockets and missiles, batteries fired by photo-electric cells, chemical weapons, composite bombers and air-launched flying bombs.
Основная часть https://birserg-1977.livejournal.com/976200.html