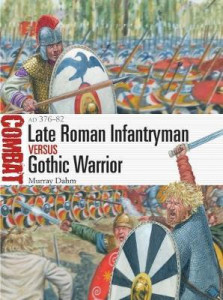 Ravaged by civil war and pressure from the Huns to the east, in late summer AD 376 the Gothic tribe of the Theruingi - up to 200,000 people under their leader Fritigern - gathered on the northern bank of the River Danube and asked the Eastern Roman emperor, Valens, for asylum within the empire. After agreeing to convert to Arian Christianity and enrol in the Roman Army, the Goths were allowed to cross the Danube and settle in the province of Thrace. Far more people crossed the Danube than the Romans expected, however, and with winter approaching, the local Roman commander, Lupicinus, lacked the resources to feed the newcomers and did not possess sufficient troops to control them. Treated poorly and running out of food, the Goths very quickly lost faith in the Roman promises.
Meanwhile, other Gothic tribes also sought permission to cross the Danube. The Greuthungi were refused permission, but soon learned that local Roman garrisons had been depleted to supervise the march of the Theruingi to the town of Marcianopolis, close to the eastern shore of the Black Sea. Taking advantage of this, the Greuthungi also entered Roman territory. Camping outside Marcianopolis, Lupicinus denied the Goths access to the town's food stores, provoking the Theruingi to begin skirmishing with the Roman troops. Fritigern convinced Lupicinus to let the Gothic leaders go and calm their people, but they did nothing to quell the warlike temper of his warriors. Lupicinus summoned troops to him, but in late 376 these Roman forces were defeated - the first of several defeats for the Romans that would culminate in the fateful battle of Adrianople in August 378, at which Roman forces led by the emperor himself confronted the Gothic host. The aftermath and repercussions of Adrianople have been much debated, but historians agree that it marks a decisive moment in the history of the Roman world. This fully illustrated book investigates the fighting men of both sides who clashed at the battles of Marcianopolis, Ad Salices and Adrianople, as the fate of the Western Roman Empire hung in the balance. 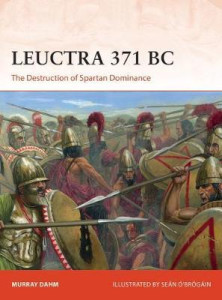 The battle of Leuctra, fought in early July in 371 BC was one of the most important battles ever to be fought in the ancient world. Not only did it see the destruction of the Spartan dominance of Greece, it also introduced several tactical innovations which are still studied and emulated to this day. Sparta's hegemony of Greece (which had been in effect since the Persian wars of 480/79 and especially since the Peloponnesian War in 431-404 BC) was wiped away in a single day of destruction. Sparta would never recover from the losses in manpower which were suffered at Leuctra.
Sparta's defeat created a power vacuum in Greece which several states attempted to fill (the Theban Hegemony and the resurgence of Athens) and gave rise to the dominance of Macedon in the 350s when Macedon would conquer Greece in 338 BC at the battle of Chaeronea. None of which would have been possible without the events at Leuctra. The Theban phalanx at Leuctra, with its great depth of 50 ranks introduced new tactical thinking in Greek warfare and this thinking eventually led to the Macedonian phalanx of Philip and Alexander which conquered Greece and the Persian Empire less than 40 years later. The Theban commander at Leuctra, Epaminondas, also introduced the idea of drawing up his forces in echelon and fighting with a refused flank - something Alexander emulated in all of his major battles and which has been attempted at countless battles since.
The importance of the battle of Leuctra cannot be underestimated. This superbly illustrated title gives the reader a detailed understanding of this epic clash of forces, what led to it, its commanders, sources and the consequences it had for future civilizations. 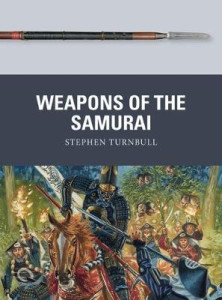 This fully illustrated new book describes and analyses the weapons and equipment traditionally associated with the samurai, Japan's superlative warriors. It examines the range of weapons used by them at different times and in different situations.
Beginning with the rise of the samurai during the 10th century, this lively study traces the introduction of edged weapons (cutting and piercing) and missile weapons (bows and guns) over the next 500 years. The book shows clearly how they were employed by individual samurai using many previously untranslated primary texts, and explains how their use spread more widely among low-class troops, pirates and rebels. It also shows how schools of martial arts took over and changed the weapons and their uses during the peaceful Edo Period (1615-1868). 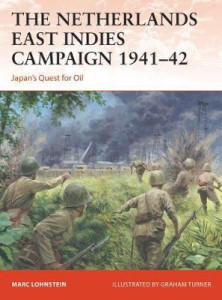 Imperial Japan's campaigns of conquest in late 1941/early 1942 were launched in order to achieve self-sufficiency for the Japanese people, chiefly in the precious commodity of oil. The Netherlands (or Dutch) East Indies formed one of Japan's primary targets, on account of its abundant rubber plantations and oilfields - the latter, in particular, was highly prized, given that the colony was the fourth-largest exporter of oil in the world. Japan itself lacked any form of domestic production.
The Japanese despatched an enormous naval task force to support the amphibious landings over the vast terrain of the Netherlands East Indies. The combined-arms offensive was divided into three groups: western, centre and eastern. Borneo was struck first in mid-December 1941, and assaults on Celebes, Amboin, Timor, Java, Sumatra, Ambon and Dutch New Guinea followed. Allied forces in the NEI comprised British, Australian, Dutch and American personnel. A combined theatre headquarters (ABDACOM) was established on 15 January 1942 in an effort to counter the Japanese offensives. The isolated airfields and oilfields were, however, picked off one by one by the Japanese, in the rush to secure the major islands before major Allied reinforcements arrived.
This superbly illustrated title describes the operational plans and conduct of the fighting by the major parties involved, and assesses the performance of the opposing forces on the battlefield, bringing to life an often-overlooked campaign of the Pacific War. 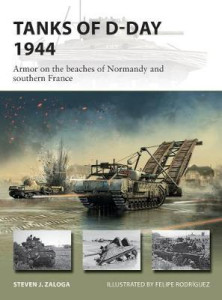 Allied success in invading Fortress Europe (the area of Continental Europe occupied by Nazi Germany) depended on getting armor onto the beaches as fast as possible. This book explains how the Allies developed the specialist tanks it needed, their qualities, deployment and numbers, and how they performed on the two crucial days when France was invaded, firstly in Normandy and then in Provence.
The focus of this volume will be on the specialized tanks developed for the Operation Neptune amphibious landings including the Duplex Drive amphibious Sherman tanks used on both the US and British/Canadian beaches. It also covers the specialized engineer tanks called "Armoured Funnies" of the British 79th Armoured Division and addresses the popular myth that US Army refusal to employ the Armoured Funnies was a principal cause for the high casualties at Omaha Beach. There is also coverage of Operation Overlord's "Forgotten D-Day", the amphibious landings of Operation Dragoon. This book addresses why there were so few Panzers opposing the landings from the German perspective as well as detailing the extent of German tank/assault gun activity on D-Day.
Tags: Анонсы, Книги
Subscribe