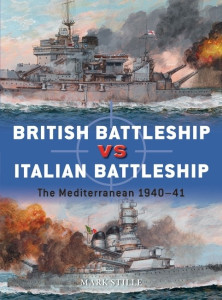 During World War II's battle for control of the Mediterranean, both the British and Italian navies planned to bring their battle fleets into play. At the centre of both of these fleets was a core of battleships which both sides expected to play a decisive role in the conflict.
On 9 July 1940, the two navies met in the central Mediterranean, as two Italian battleships faced off against three of their British counterparts. Christened the Battle of Calabria, the action allowed the ships to play to their strengths, engaging in a long-range gunnery duel, the very thing they had been designed for. Though both sides shot well, the only hit was scored by Warspite on the Italian battleship Giulio Cesare. The Italians were forced to withdraw, and the action ended up being indecisive, but it was the largest fleet action fought in the Mediterranean during the war. As well as this battle, there were other occasions during the war when both British and Italian battleships were present and influential, but during which they never engaged each other directly - the Battle of Spartivento on 27 November 1940, and the Battle of Cape Matapan on 28-29 March 1941.
Packed with full-colour artwork, carefully selected archive photographs and expert analysis, this title explores in detail the role played by British and Italian battleships in these encounters, and their influence in the Mediterranean theatre of World War II. 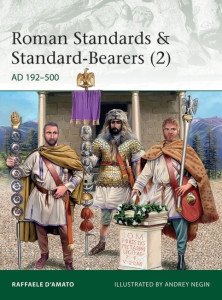 The Late Roman Empire was a period of significant change in the designs of standards and in the costumes of standard-bearers. During the middle decades of the chaotic 3rd century, evidence confirms the continued use of the old legionary eagle and the signa of the old cohorts and centuries, alongside flags and Imperial images. The two major trends over the later generations were the adoption of Christian symbols on standards (e.g. Constantine the Great's Chi-Rho), and the proliferation of different types of flags. This had begun in the late 2nd century with the adoption of the 'barbarian' dragon standard, the windsock-shaped draco, which continued to be displayed alongside various other flags in the Greek-speaking Eastern Empire, whose influence increased greatly. Meanwhile, the growing employment of foreign units was such that by the 5th century we have evidence of the use of Hunnic symbolism among a Roman general's suite of standards. The costumes of standard-bearers also evolved as 'Persian' styles spread from Constantinople.
This title explores all these changes in depth, charting the development of various costumes and designs and the waxing and waning influence of various cultures and religious considerations. The text is supported by specially commissioned illustrations and artist's reconstructions of the standards and their bearers. 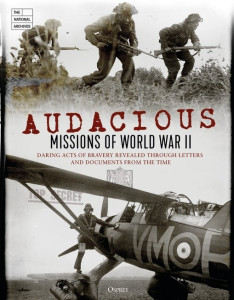 Winning World War II was about more than military force. It required guile, and tremendous acts of bravery by Special Forces and intelligence operatives who had the odds stacked against them. Using hundreds of documents and images from The National Archives, including some that have never been seen in print before, this book reveals some of World War II's most audacious missions.
These include Operation Anthropoid, the plot to assassinate SS General Reinhard Heydrich in Czechoslovakia in 1942, Operation Chariot, the attempt to damage the mighty German warship Tirpitz while she was in dock in St-Nazaire in France; and Operation Mincemeat, a complex plot whereby a corpse, replete with documentation designed to mislead the enemy, was dropped in southern Spain to spread misinformation. 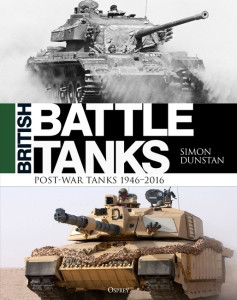 This book, the last in a four-part series on British Battle Tanks covering the whole history of British armoured warfare, concentrates on those vehicles that have served following the end of World War II up to the present day.
Starting with the Centurion, the title explores those types that equipped the armoured divisions lined up on the German plains to resist any potential Soviet offensive, as well as in Korea and Suez, including the Chieftain and Conqueror, and modern tanks such as the Challenger 2 which are still in service today. Covering the many variants of these and other tanks in British service as well as their deployments around the world, including in Afghanistan and Iraq, this illustrated volume is a comprehensive guide to the development of British tanks since the Second World War.
Tags: Анонсы, Книги
Subscribe