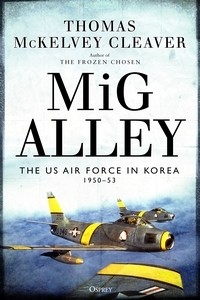 Of the many myths that emerged following the end of the Korean War, the prevailing one in the West was that of the absolute supremacy of US Air Force pilots and aircraft over their Soviet-supplied opponents. The claims of the 10:1 victory-loss ratio achieved by the US Air Force fighter pilots flying the North American F-86 Sabre against their communist adversaries, amongst other such fabrications, went unchallenged until the end of the Cold War, when Soviet records of the conflict were finally opened.
From that point onwards, a very different story began to emerge. Far from decisive American victories over an unsophisticated opponent, the aerial battles of the Korean War were, at least in the early years, evenly matched affairs, fought to an approximate 1:1 victory-loss ratio. Though the Soviet victories declined over the following years, this had more to do with home politics than American tactics.
Regardless of the accuracy of claims and wartime propaganda, one fact stands clear: in the battle for air supremacy over Korea, the US Air Force denied to its opponents the opportunity to intervene over the battlefield. In the face of overwhelming enemy manpower superiority, this allowed the United Nations forces to hold the line in Korea until an armistice that protected South Korea could be put into effect
In addition to the aerial combat over MiG Alley, this title covers the full range of US Air Force activities over Korea, including the failed strategic bombing campaign and the escalating nuclear threat. Incorporating first-hand accounts from those involved, both US and Russian, this new history of the US Air Force in Korea reveals the full story of this bitter struggle in the Eastern skies. 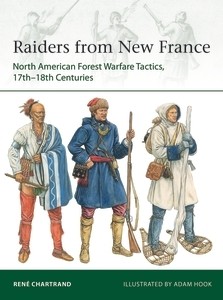 Though the French and British colonies in North America began on a 'level playing field', French political conservatism and limited investment allowed the British colonies to forge ahead, pushing into territories that the French had explored deeply but failed to exploit. The subsequent survival of 'New France' can largely be attributed to an intelligent doctrine of raiding warfare developed by imaginative French officers through close contact with Indian tribes and Canadian settlers. The ground-breaking new research explored in this study indicates that, far from the ad hoc opportunism these raids seemed to represent, they were in fact the result of a deliberate plan to overcome numerical weakness by exploiting the potential of mixed parties of French soldiers, Canadian backwoodsmen and allied Indian warriors.
Supported by contemporary accounts from period documents and newly explored historical records, this study explores the 'hit-and-run' raids which kept New Englanders tied to a defensive position and ensured the continued existence of the French colonies until their eventual cession in 1763. 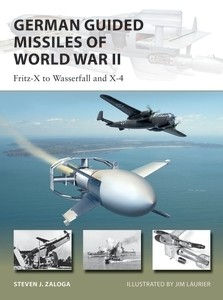 Although not as well-known as the V-1 buzz bomb and the V-2 missile, the first German missiles to see combat were anti-ship missiles, the Henschel Hs.293 guided missile and the Fritz-X guided bomb. These began to see extensive combat in the Mediterranean in 1943. In their most famous use, the Italian battleship Roma was sunk by a Fritz-X attack in September 1943 when Italy attempted to switch sides. The serious threat posed by these missiles led to a vigorous but little known ‘Wizard War' by the Allies to develop electronic counter-measures, the first effort of its kind.
Besides the anti-ship missiles, the other major category of German missiles were the air-defence missiles. Germany suffered extremely heavy losses from Allied strategic bombing attacks, and German fighter and flak defences proved increasingly unsuccessful. As a result, the Luftwaffe began an extensive programme to deploy several families of new air defence missiles to counter the bomber threat, including the Wasserfall, Schmetterling, and others. This book traces the origins of these missile programmes and examines their development and use in combat. With full-colour illustrations and detailed explorations of the stories behind the missiles, this study offers a comprehensive overview of German guided missiles in the World War II era. 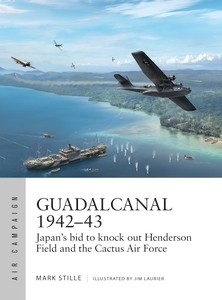 The campaign for Guadalcanal, which stretched from August 1942 until February 1943, centered on Henderson Field. The airfield was captured by the US on 8 August and placed into operation by 20 August. As long as the airfield was kept operational and stocked with sufficient striking power, the Japanese could not run convoys with heavy equipment and large amounts of supplies to the island. Instead, they were forced to rely on night runs by destroyers which could not carry enough men or supplies to shift the balance decisively against the American garrison on the island.
The American air contingent on the island, named the ‘Cactus Air Force', comprised Marine, Navy and Army Air Force units. It had the challenging mission of defending the airfield against constant Japanese attacks, and more importantly, of striking major Japanese attempts to reinforce the island. The mission of neutralizing Henderson Field fell primarily to the Imperial Navy's Air Force flying out of airfields in the Rabaul area. The units charged with this mission were among the most accomplished in the entire Imperial Navy with a high proportion of very experienced pilots and a superb air superiority fighter (the famous ‘Zero'). However, the distance from Rabaul to Guadalcanal handicapped Japanese operations and their primary bomber was terribly vulnerable to interception.
This book traces the air campaign from both sides and explores the factors behind the American victory and the Japanese defeat. The text is supported by full-colour illustrations and contemporary photography. 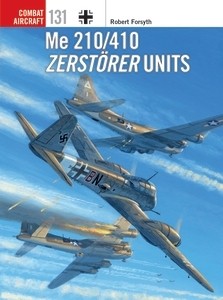 Intended as a progressive development of the twin-engined Bf 110 Zerstörer (‘destroyer' or heavy fighter), the Me 210 first took to the air in September 1939. However, due to a lack of sufficient flight-testing before being declared service-ready, the Me 210 suffered from a less than satisfactory reputation in respect to its flight characteristics and weak undercarriage. After enhancements were made to the fuselage and wings, and the power of the plane was increased, the Me 210 became the Me 410 in late 1942.
By this stage of the war much was expected of the two types, which were forced to fly in very dangerous skies over North Africa and in the defence of the German homeland. Both aircraft were deployed as heavy fighters, fighter-bombers, reconnaissance platforms and interceptors, seeing service with a number of different units. The Me 410 was fitted with 30 mm cannon, 21 cm underwing mortars and the colossal 5 cm BK cannon that was intended to pack a punch against the USAAF's four-engined bombers which threatened the Reich in large numbers from 1943 onwards.
In this title, supported by contemporary photography and full-colour artwork, Robert Forsyth tells the complex story of the Me 210 and 410, detailing their development and assessing their capabilities as combat aircraft. 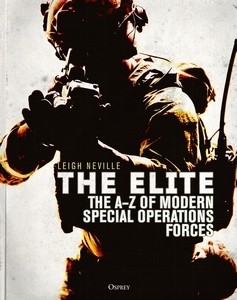 Using previously unpublished images from around the world, as well as maps and illustrations, The Elite: The A-Z of Modern Special Operations Forces is the ultimate guide to the secretive world of modern Special Forces. It sends the reader back in time to operations such as Eagle Claw in Iran and the recapture of the Iranian Embassy in London and then forward to recent operations against al Shabaab and Islamic State. Entries also detail units ranging from the New Zealand SAS Group to the Polish GROM, and key individuals from Iraq counter-terrorism strategist General Stanley McChrystal to Victoria Cross recipient SASR Corporal Mark Donaldson.
Answering questions such as how much the latest four-tube night vision goggles worn by the SEALs in Zero Dark Thirty cost, what types of parachutes are used to covertly parachute into a target location, and if Special Forces still use HALO jumps, this book is the definitive single-source guide to the world's elite Special Forces.
Tags: Анонсы, Книги
Subscribe