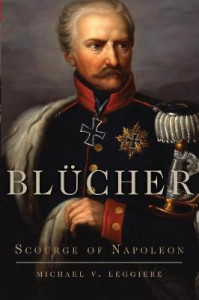 One of the most colorful characters in the Napoleonic pantheon, Gebhard Leberecht von Blücher (1742-1819) is best known as the Prussian general who, along with the Duke of Wellington, defeated Napoleon at the Battle of Waterloo. Throughout his long career, Blücher distinguished himself as a bold commander, but his actions at times appeared erratic and reckless. This magnificent biography by Michael V. Leggiere, an award-winning historian of the Napoleonic Wars, is the first scholarly book in English to explore Blücher's life and military career--and his impact on Napoleon.
Drawing on exhaustive research in European archives, Leggiere eschews the melodrama of earlier biographies and offers instead a richly nuanced portrait of a talented leader who, contrary to popular perception, had a strong grasp of military strategy. Nicknamed "Marshal Forward" by his soldiers, he in fact retreated more often than he attacked. Focusing on the campaigns of 1813, 1814, and 1815, Leggiere evaluates the full effects of Blücher's operations on his archenemy.
In addition to providing military analysis, Leggiere draws extensively from Blücher's own writings to reveal the man behind the legend. Though tough as nails on the outside, Blücher was a loving family man who deplored the casualties of war. This meticulously written biography, enhanced by detailed maps and other illustrations, fills a large gap in our understanding of a complex man who, for all his flaws and eccentricities, is justly credited with releasing Europe from the yoke of Napoleon's tyranny. 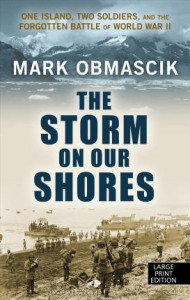 "Mark Obmascik has deftly rescued an important story from the margins of our history--and from our country's most forbidding frontier. Deeply researched and feelingly told, The Storm on Our Shores is a heartbreaking tale of tragedy and redemption." --Hampton Sides, bestselling author of Ghost Soldiers, In the Kingdom of Ice, and On Desperate Ground The heart-wrenching but ultimately redemptive story of two World War II soldiers--a Japanese surgeon and an American sergeant--during a brutal Alaskan battle in which the sergeant discovers the medic's revelatory and fascinating diary that changed our war-torn society's perceptions of Japan. May 1943. The Battle of Attu--called "The Forgotten Battle" by World War II veterans--was raging on the Aleutian island with an Arctic cold, impenetrable fog, and rocketing winds that combined to create some of the worst weather on Earth. Both American and Japanese forces were tirelessly fighting in a yearlong campaign, and both sides would suffer thousands of casualties. Included in this number was a Japanese medic whose war diary would lead a Silver Star-winning American soldier to find solace for his own tortured soul. The doctor's name was Paul Nobuo Tatsuguchi, a Hiroshima native who had graduated from college and medical school in California. He loved America, but was called to enlist in the Imperial Army of his native Japan. Heartsick, wary of war, yet devoted to Japan, Tatsuguchi performed his duties and kept a diary of events as they unfolded--never knowing that it would be found by an American soldier named Dick Laird. Laird, a hardy, resilient underground coal miner, enlisted in the US Army to escape the crushing poverty of his native Appalachia. In a devastating mountainside attack in Alaska, Laird was forced to make a fateful decision, one that saved him and his comrades, but haunted him for years. Tatsuguchi's diary was later translated and distributed among US soldiers. It showed the common humanity on both sides of the battle. But it also ignited fierce controversy that is still debated today. After forty years, Laird was determined to return it to the family and find peace with Tatsuguchi's daughter, Laura Tatsuguchi Davis. Pulitzer Prize-winning journalist Mark Obmascik brings his journalistic acumen, sensitivity, and exemplary narrative skills to tell an extraordinarily moving story of two heroes, the war that pitted them against each other, and the quest to put their past to rest. 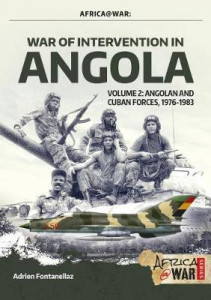 As of mid-1976, the civil war in Angola was seemingly decided: supported by a large contingent of Cuban forces, the MPLA established itself in power in Luanda. Its native competitors, the US-French-Zaire-supported FNLA, and UNITA, supported by China and South Africa, were in tatters. The French and Zaire-supported FLEC - an armed movement for the independence of the oil-rich Cabinda enclave - was in disarray. The last few of their surviving units were either driven out of the country, or forced into hiding in isolated corners of northern and south-eastern Angola.
Nevertheless, the war went on. The MPLA's government failed to decisively defeat UNITA, in southern Angola, and then found itself facing a coup attempt from within in May 1977. Crushed in blood, this resulted in thousands being jailed and tortured: many more escaped abroad, where they reinforced the ranks of the battered opposition.
The coup prompted the Soviets to attempt increasing their influence with the aim of establishing permanent military bases in the country. While all such overtures were turned down, Angolan operations along the border to what was then the South-West Africa (subsequently Namibia) in October 1980, combined with the increased activity of SWAPO - an insurgency against the South African control of that territory - subsequently Namibia - prompted South Africa to launch another military intervention and resume supporting UNITA. In turn, this prompted not only the Cubans to further increase their military presence, but also the Soviet Union into delivering massive amounts of military aid to the government in Luanda. Angola not only assumed the role of one of the major hot battlefields in the Cold War: its `civil war' saw a number of major showdowns between diverse belligerents, culminating in the Battle of Cangamba in 1983.
Based on extensive research, with help of Angolan and Cuban sources, the `War of Intervention in Angola, Volume 2', traces the military build-up of the Cuban and Soviet-supported Angolan military, the FAPLA and its combat operations, and those of the Cuban military in Angola, in the period 1976-1983, their capabilities and intentions, and their battlefield performances.
The volume is illustrated with over 100 rare photographs, half a dozen maps and 18 colour profiles. 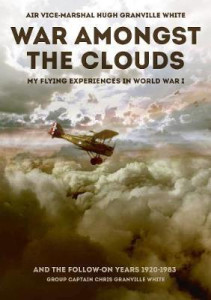 This is a personal account written by a man reflecting on his time as a young pilot with the Royal Flying Corps in France during the First World War, who eventually became an ace. It is a story of survival against the odds at a time when the conduct of air operations depended so much on individual skills, innovation, courage - and luck.
Hugh White flew F.E.2D Scout aircraft with 20 Squadron as a reconnaissance patrol pilot aged just eighteen. By his nineteenth birthday he was a flight commander and the most experienced pilot on the squadron. He then became a flight commander on 29 Squadron flying the S.E.5a which was Britain's best fighter aircraft at the time. During the two years of flying, he experienced and survived a series of escapades including a dramatic mid-air collision with the enemy. Told by Hugh in his own words, he gives a unique insight into war in the air.
With the break-up of his squadron and being reduced to a substantive rank - simply because of his young age - Hugh's writing ends in 1919. From this point, the story is continued by his younger son Chris. He describes Hugh's life and RAF career from flying Bristol Fighters in India during the 1920s, undertaking engineer training at Henlow, to commanding 501 Squadron in the mid-1930s and becoming a full-time technical officer until his retirement as an air vice-marshal in 1955.
This book includes a foreword by Air Marshal Sir Frederick Sowrey (Hugh's nephew) which puts Hugh White's early wartime service into context. It is a timely reminder, following the centenary of the end of the First World War, of the difficulties that young pilots faced at the time. A must-read for those interested in wartime exploits. 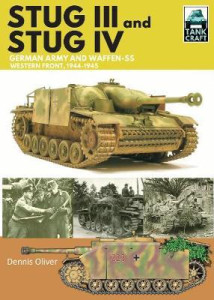 In the last years of the Second World War the Sturmgesch tz III (StuG III) and Sturmgesch tz IV (StuG IV) played a vital role as assault guns during the German army's struggle to block the Allied advance on the Western Front. As the Wehrmacht's tank forces declined, these armoured vehicles were thrown into every defensive operation. They are not as well known as the Tigers and Panthers, but German resistance would have been much weaker without them. They were also among the most frequently encountered German armoured vehicles on the battlefields, which is why they are such a fascinating subject for Dennis Oliver in this volume in the TankCraft series
He uses archive photos and extensively researched colour illustrations to examine the StuG III and StuG IV deployed by the German army and the Waffen-SS during these doomed campaigns. A key section of his book displays available model kits and aftermarket products, complemented by a gallery of beautifully constructed and painted models in various scales. Technical details as well as modifications introduced during production and in the field are also examined providing everything the modeller needs to recreate an accurate representation of these historic armoured vehicles. 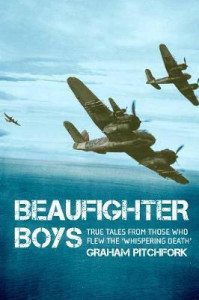 A departure from the Cold War for the Boys series! Researched many years ago by the author for a project which did not come to fruition, Beaufighter air and ground crew gave freely of their stories which ranged from complete memoirs to brief anecdotes. And there were a plethora of original photographs for him to choose from.
Graham Pitchfork has built on these reminiscences to trace the roles of Beaufighter squadrons spread across all the theatres of World War Two operations. From home bases, through north-west Europe, North Africa, Malta and the Mediterranean to the far Far East and south-west Pacific, the Beaufighter served far and wide as did the crews of the RAF, RAAF, SAAF and New Zealand and Canadian squadrons. All are covered in this quite unique book to be savoured by all those interested in the war in the air from 1939-1945. 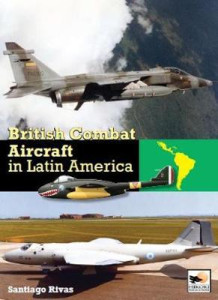 This book covers the story of all the British military aircraft that served in Latin America since 1940. Though the presence of British combat types is now almost gone from the skies over Latin America, its legacy will last for a long time.
After World War II, Britain was happy to sell the most modern equipment to the region giving it an advantage over the United States, hitherto the main provider of planes to Latin American air forces. This was one of the main reasons why many air forces chose to buy British combat aircraft up to the 1970s.
In many countries Gloster Meteors or de Havilland Vampires were the first jet combat aircraft, while the Argentina's Avro Lancasters and Lincolns was once the most potent bomber force in Latin America. BAC Canberras had five South American operators, were the only jet bombers in use in the region and saw action several times. Combat activity by British types include Argentine planes used during the 1955 revolution and ironically Argentine Canberras in action during the Malvinas/Falklands War against British forces, Cuban Sea Furies over the Bay of Pigs, Peruvian Canberras in the conflicts with Ecuador, Chilean Hunters during the 1973 coup d'etat, Dominican Vampires, Mosquitoes and Beaufighters in internal struggles.
Tags: Анонсы, Книги
Subscribe