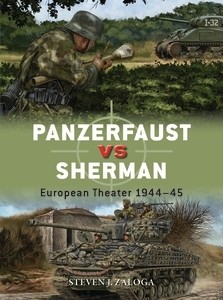 In the summer of 1944, across the battlefields of Normandy, US tanks were confronted with a dangerous challenge: the mobile and deadly Panzerfaust and Panzerschreck anti-tank weapons wielded by the German infantry. Having only occasionally encountered such weaponry before, the US tankers were ill-equipped to defend against this kind of attack, and the threat only increased as the summer wore on.
This Duel title follows the technological battle for dominance that ensued, as the US Army devised new ways to defend against the threat posed by the German shaped-charge projectiles. From the addition of sandbags and spare tracks to individual tanks made by anxious crews on the ground to the large-scale programmes put together by the US armies, the book explores the implementation and effectiveness of the various tactics employed by the tank crews, as well as the technology behind the anti-tank weapons wielded by their German adversaries. Drawing on first-hand accounts from the men on the ground, this illustrated title examines the evolving trial of strength between US armour and innovative German anti-tank weaponry in the climactic months of World War II in Europe. 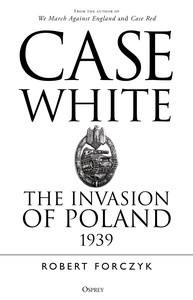 The German invasion of Poland on 1 September, 1939, designated as Fall Weiss (Case White), was the event that sparked the outbreak of World War II in Europe. The campaign has widely been described as a textbook example of Blitzkrieg, but it was actually a fairly conventional campaign as the Wehrmacht was still learning how to use its new Panzers and dive-bombers.
The Polish military is often misrepresented as hopelessly obsolete and outclassed by the Wehrmacht, yet in fact it was well-equipped with modern weapons and armour. Indeed, the Polish possessed more tanks than the British and had cracked the German Enigma machine cipher. Though the combined assault from Germany and the Soviet Union defeated Poland, it could not crush the Polish fighting spirit and thousands of soldiers and airmen escaped to fight on other fronts. The result of Case White was a brutal occupation, as Polish Slavs found themselves marginalized and later eliminated, paving the way for Hitler's vision of Lebensraum (living space) and his later betrayal and invasion of the Soviet Union in 1941.
Using a wide array of sources, Robert Forczyk challenges the myths of Case White to tell the full story of the invasion that sparked history's greatest conflict. 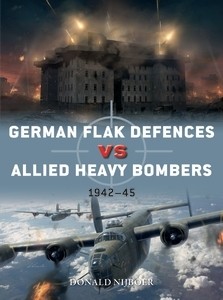 Since the end of World War II, the strategic bombing of Germany has inspired numerous studies, countless books and several documentary films, and it is not surprising. With more than one million tons of bombs dropped, close to 300,000 civilians killed, 700,000 wounded and in excess of 3,500,000 industrial and residential structures destroyed, the Allied bomber offensive was industrial war on a grand scale. The air battle that raged over Germany has often been described as a battle between Allied and German fighters but what has been frequently missed by historians on all sides is the impact of German anti-aircraft defences (flak). Though often dismissed as ineffective and a waste of valuable material and personnel, the German flak arm made a major contribution to the defence of the Third Reich - at least half of the American aircraft shot down over Germany fell to flak, and according to the RAF Official History, it was estimated that flak accounted for 1229 of 3302 aircraft lost by Bomber Command between 1942 and April 1945. Additionally, the strategic role of flak extended beyond simply shooting down aircraft - its other, more important task was to force bombers to drop their ordnance sooner or from a higher altitude, thus reducing bombing accuracy.
Both these roles are explored in depth in this detailed study of the German flak defences and of their adversaries, the Allied heavy bombers. Containing full-colour illustrations including cockpit scenes and armament views, this is the definitive guide to the much-overlooked conflict between Allied planes and German anti-aircraft defences. 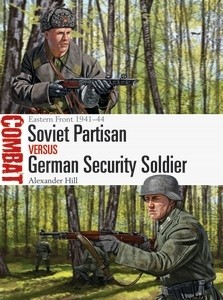 The savage partisan war on the Eastern Front during World War II saw a wide variety of forces deployed by both sides. On the Soviet side, civilian partisans fought alongside and in co-operation with Red Army troops and Red Army and NKVD ‘special forces'. On the German side, German Army security divisions, with indigenous components including cavalry, fought alongside SS police and Waffen-SS units and other front-line troops employed for short periods in the anti-partisan role.
In addition to providing the background history of the forces of both sides, this study focuses upon three examples of German anti-partisan operations that show varied success in dealing with the Soviet partisan threat. Notably, it covers a major operation in north-west Russia during the spring of 1943 - Operation Spring Clean - that saw Wehrmacht security forces including local components fighting alongside troops under the SS umbrella against a number of Soviet partisan brigades. During the fighting, German forces even employed captured French tanks from earlier in the war against the partisans.
Featuring specially commissioned artwork and drawing upon an array of sources, this is an absorbing account of the brutal fighting between German security forces and their Soviet partisan opponents during the long struggle for victory on World War II's Eastern Front. 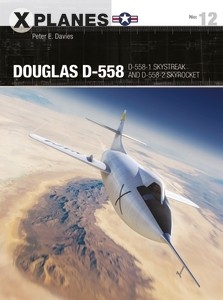 The six Douglas D-558 research aircraft, built as two variants, were produced for a US Navy and NACA collaborative project to investigate flight in the high subsonic and supersonic regimes and to develop means of coping with the dangerous phenomena of compressibility and pitch-up which had caused many accidents to early jets. Wind tunnels could not provide the necessary data so pilots had to risk their safety in experimental aircraft which, for their time, achieved phenomenal performance.
Both series of D-558 were well-designed, strong and efficient aircraft which enabled test pilots to tackle the unknown in comparative safety. Though delayed by their innovative but troublesome power-plants, and limited by the cost of their air-launched sorties, they went well beyond their original Mach 1 speed objective and continued to generate information that provided design solutions for a whole generation of supersonic combat aircraft. Although the final stage of the D-55 programme, the USN's ‘militarized' D-558-3, never happened, the Navy was able to apply the lessons of the programme to its much more practical combat types such as the F8U Crusader and F3H Demon.
Supported by full-colour artwork including three-view plates of the two D-558 models and a technical view of the D-2 cockpit, this authoritative text offers a comprehensive guide to the record-breaking Navy research craft.
Tags: Анонсы, Книги
Subscribe