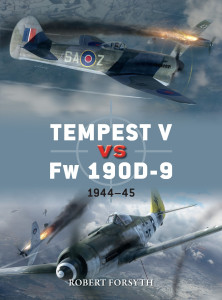 Arguably two of the finest piston-engined fighters ever built, the Tempest V and Fw 190D-9 raised the bar in terms of aircraft design and operational capability during World War II. The long-nosed ‘Dora 9', designed by Kurt Tank, first appeared in the skies over the Western and Eastern Fronts in the late summer of 1944. Fast, and with an exceptional rate of climb, it quickly bettered almost every fighter that the RAF, USAAF and Soviet Red Air Force could field.
The Hawker Tempest V entered service in early 1944, initially proving itself a stalwart performer when it was deployed to intercept V1 flying bombs over southern England. From the autumn of 1944, the Tempest V also equipped squadrons of the 2nd Tactical Air Force, operating in support of the Allied armies advancing across north-west Europe. It became a potent ground-attack aircraft, armed with underwing rockets, but also a first-class interceptor when pitted against the Luftwaffe's advanced Fw 190D-9 and Me 262.
Featuring full colour artwork, this book describes in fascinating detail combats between the Tempest Vs of No 274 Sqn and the Fw 190D-9s of I. and III./JG 26 between February and April 1945. 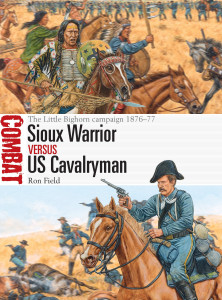 Following the discovery of gold deposits, in December 1875 the US Government ordered the indigenous population of the Black Hills in what is now South Dakota and Wyoming, the Sioux, to return to the Great Sioux Reservation. When the Sioux refused, the US Army sent forces into the area, sparking a conflict that would make Lieutenant Colonel George Custer, Chief Sitting Bull, Crazy Horse, and others household names around the world.
Examining a series of engagements in the Black Hills War, including Rosebud, Little Bighorn, and Slim Buttes, this fully illustrated study assesses the forces fighting on both sides in this momentous campaign, casting light on the origins, tactics, armament, and battlefield performance of the US Cavalry and their Sioux opponents at the height of the Indian Wars. In August 1939, Nazi Germany launched its infamous Blitzkrieg invasion of Poland, bringing about the outbreak of World War II. Faced with highly tactical and accelerated attacks aimed at disrupting the line of defence and encircling vulnerable troops, Allied forces broke under pressure. Within the space of a year, France had been invaded and occupied, while the forces of Great Britain had retreated headlong back across the Channel. Further campaigns in the air and at sea sought to subdue the British Isles, while more lightning-fast attacks in 1941 overran Yugoslavia and Greece, leaving the bulk of Continental Europe under Nazi control. Though the dominance of the Blitzkrieg method was to be challenged in the latter part of the war, as Allied forces found methods of disrupting the attacks and dominating the battlefields, its unparalleled success in the early years of the conflict brought Europe to its knees.
Featuring 107 detailed maps, this impressive atlas shows, in intricate detail, the fighting and physical challenges faced by the German attackers and Allied defenders. This will be a treasure for World War II enthusiasts and collectors alike.
Overview
Chapter 1: Pre-war Europe
Chapter 2: The Polish Campaign
Chapter 3: Soviet Aggression
Chapter 4: The Scandinavian Campaign
Chapter 5: The Western Campaign
Chapter 6: The Air War Over Britain and Germany
Chapter 7: The Naval War
Chapter 8: The Balkan Campaign
Appendix
Bibliography 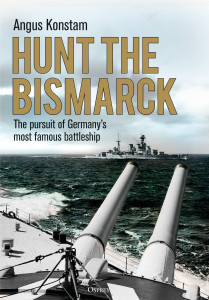 Hunt the Bismarck tells the story of Operation Rheinübung, the Atlantic sortie of the Nazi Germany's largest battleship in May 1941.
Bismarck entered service in the summer of 1940. She was well-armed, with eight 15-inch guns as well as a powerful array of lighter weapons, while her armoured protection earned her the reputation of being unsinkable. This claim was finally put to the test in May 1941, when she sortied into the Atlantic and fought the legendary battle of the Denmark Strait, destroying HMS Hood, the pride of the Royal Navy. Bismarck was now loose in the North Atlantic. However, damage sustained in the battle limited her ability to roam at will, while the Royal Navy deployed the Home Fleet to revenge the Hood. The stage was set for the greatest chase story in the history of naval warfare.
Drawing on a wealth of first-hand accounts, and intertwining extensive research into a fast-paced narrative, this is the most readable and accurate account of Bismarck's epic voyage ever produced.
Prologue: The Hood blows up
Preface
Chapter 1: The Bismarck
Chapter 2: Germany's Atlantic Strategy
Chapter 3: The Home Fleet
Chapter 4: Planning Operation Rheinübung
Chapter 5: Through the Baltic
Chapter 6: Norwegian Sojourn
Chapter 7: Move and Counter-Move
Chapter 8: The Denmark Strait
Chapter 9: Duel at Dawn
Chapter 10: Breakout into the Atlantic
Chapter 11: Evading her Pursuers
Chapter 12: The Fruitless Search
Chapter 13: Air Strike
Chapter 14: Destroyers in the dark
Chapter 15: The Final Battle
Chapter 16: Gotterdammerung
Epilogue
Conclusion 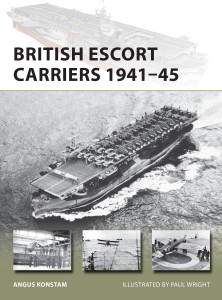 In 1941, as the Battle of the Atlantic raged and ship losses mounted, the British Admiralty desperately tried to find ways to defeat the U-Boat threat to Britain's maritime lifeline. Facing a shortage of traditional aircraft carriers and shore-based aircraft, the Royal Navy, as a stopgap measure, converted merchant ships into small ‘escort carriers'. These were later joined by a growing number of American-built escort carriers, sent as part of the Lend-Lease agreement.
The typical Escort Carrier was small, slow and vulnerable, but it could carry about 18 aircraft, which gave the convoys a real chance to detect and sink dangerous U-Boats. Collectively, their contribution to an Allied victory was immense, particularly in the long and gruelling campaigns fought in the Atlantic and Arctic. Illustrated throughout with detailed full-colour artwork and contemporary photographs, this fascinating study explores in detail how these adaptable ships had such an enormous impact on the outcome of World War II's European Theatre. 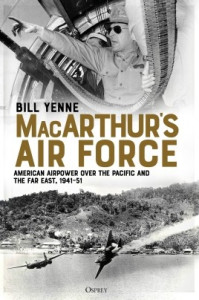 General Douglas MacArthur is one of the towering figures of World War II, and indeed of the twentieth century, but his leadership of the second largest air force in the USAAF is often overlooked. When World War II ended, the three numbered air forces (the Fifth, Thirteenth and Seventh) under his command possessed 4,004 combat aircraft, 433 reconnaissance aircraft and 922 transports. After being humbled by the Japanese in the Philippines in 1942, MacArthur and his air chief General George Kenney rebuilt the US aerial presence in the Pacific, helping Allied naval and ground forces to push back the Japanese Air Force, re-take the Philippines, and carry the war north towards the Home Islands. Following the end of World War II MacArthur was the highest military and political authority in Japan, and at the outbreak of the Korean War in June 1950 he was named as Commander in Chief, United Nations Command. In the ten months of his command his Far East Air Forces increased dramatically and saw the first aerial combat between jet fighters.
Written by award-winning aviation historian Bill Yenne, this engrossing book traces the journey of American air forces in the Pacific under General MacArthur's command, from their lowly beginnings to their eventual triumph over Imperial Japan, followed by their entry into the jet age in the skies over Korea.
Prologue: MacArthur and Airpower
Chapter 1: Starting Out in the Crosshairs of Calamity
Chapter 2: Shoestring Air Force
Chapter 3: Who's in Charge of What?
Chapter 4: Making Do with Nothing
Chapter 5: Clinging to New Guinea
Chapter 6: The Battles of Buna
Chapter 7: Airpower Over Naval Power
Chapter 8: The Battle of the Bismarck Sea
Chapter 9: Japanese Air Superiority Challenged
Chapter 10: Japanese Air Superiority Met Head-On
Chapter 11: Allied Air Superiority Achieved
Chapter 12: Cartwheel Over Rabaul
Chapter 13: Expanding the Perimeter
Chapter 14: The Ploesti of the Pacific
Chapter 15: MacArthur's Return to the Philippines
Chapter 16: MacArthur's Expanding Air Force
Chapter 17: Victory in Leyte and Mindoro
Chapter 18: The Bloody Road to Manila
Chapter 19: The Superfortress
Chapter 20: From Borneo to Formosa
Chapter 21: First Strikes on Japan
Chapter 23: After the War
Chapter 24: MacArthur's Air Force in Korea
Epilogue: By the Numbers 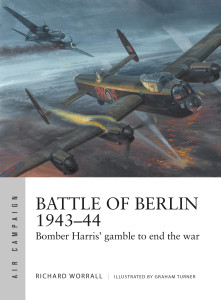 Throughout late-1943 into early-1944, an epic struggle raged over the skies of Germany between RAF Bomber Command and the Luftwaffe. This campaign had been undertaken by the Commander-in-Chief Bomber Command, Air Chief Marshal Sir Arthur Harris, and was baptized ‘The Battle of Berlin'.
The Berlin campaign was a hard, desperate slog. Struggling against dreadful and bitter winter weather, Bomber Command ‘went' to Berlin a total of sixteen times, suffering increasingly severe losses throughout the winter of 1943/44 in the face of a revitalized German air-defence. The campaign remains controversial and the jury, even today, is ultimately undecided as to what it realistically achieved. Illustrated throughout with full-colour artwork depicting the enormous scale of the campaign, this is the story of the RAF's much debated attempt to win the war through bombing alone.
Introduction
Chronology
Attacker's Capabilities
Defender's Capabilities
Campaign Objectives
Order of Battle
The Campaign
Analysis
Conclusion
Bibliography
Index
Tags: Анонсы, Книги
Subscribe